This is the home page for the Buchanan County Army JROTC program.

Here, you can check out what is new, check out some pictures of our past events on the photo page, and find out a little more about our program. This site is here to inform and keep you up to date with Buchanan County’s JROTC program. 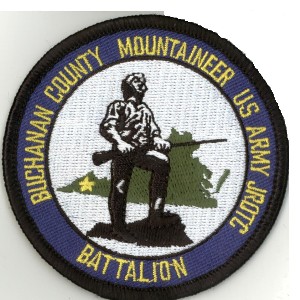 Buchanan County JROTC program has existed for over twenty years. This is a character development program and builds successful leaders for the future. Never deviating from the JROTC mission ("To Motivate Young People to be Better Citizens"), the Buchanan County JROTC program strives to help lead young people down the path of success and open doors of opportunity for those willing to put forth the effort of commitment.

JROTC instructors encourage and implement cadet leadership opportunities, allowing for direct peer-to-peer leadership. This style sends the message that students are willing, involved, and influences others to do the right thing. JROTC is a cadet lead program and requires teamwork to be successful.

Each lesson benefits the whole student and prepares them for the tedious but conquerable life ahead. For example, cadets receive life skills training in first aid, etiquette and resume writing. Here, success begins in the JROTC program.

"To Motivate Young People to Be Better Citizens"

To motivate high school students and teach them the value of
citizenship, leadership, service to community, personal responsibility
and a sense of accomplishment while instilling in them
self-esteem, teamwork and self-discipline.

- Cadets graduate from high school with a life plan.

- Be good Citizens by knowing and exercising the rights, responsibilities, privileges and freedoms of good citizenship.

- Gain leadership potential and the ability to live and work cooperatively with others;

- Learn the ability to think logically and to communicate effectively,

with emphasis on effective written and oral communication.

- Learn the importance of diet and physical fitness in maintaining good health and appearance.

- Gain an understanding of the history, purpose, and structure of Army JROTC.

and effectively working as part of a team.

The United States Army Junior Reserve Officers' Training Corps (JROTC) came into being with the passage of the National Defense Act of 1916. Under the provisions of the Act, high schools were authorized the loan of federal military equipment and the assignment of active duty military personnel as instructors.  In 1964, the Vitalization Act opened JROTC up to the other services and replaced most of the active duty instructors with retirees who worked for and were cost shared by the schools.

Title 10 of the U.S. Code declares that "the purpose of Junior Reserve Officers' Training Corps is to instill in students in United States secondary educational institutions the value of citizenship, service to the United States, personal responsibility, and a sense of accomplishment."

The JROTC Program has changed greatly over the years. Once looked upon primarily as a source of enlisted recruits and officer candidates, it became a citizenship program devoted to the moral, physical and educational uplift of American youth. Although the program retained its military structure and the resultant ability to infuse in its student cadets a sense of discipline and order, it shed most of its early military content.

The study of ethics, citizenship, communications, leadership, life skills and other subjects designed to prepare young men and woman to take their place in adult society, evolved as the core of the program. More recently, an improved student centered curriculum focusing on character building and civic responsibility is being presented in every JROTC classroom.

Is JROTC a required course?

No. JROTC is not a required course at Buchanan County Schools.

What does JROTC stand for?

JROTC stands for Junior Reserve Officer's Training Corps. It is a military regulated high school program whose purpose is to educate high school students in leadership roles while making them aware of the benefits of citizenship. The mission of JROTC is to motivate young people to become better American citizens.

The program is a full credit elective class for every semester a person takes it. JROTC combines interesting classroom instruction with the opportunity to serve the school and the community participates in extra-curricular activities, enjoy social activities, competitions (Fitness, Marksmanship, and Robotics) and have the chance to be in leadership positions.

What is exactly taught in class?

Newly added: Tutorials in foreign cultures and languages.  (not a substitute for foreign language classes)

Is there an obligation to go into the armed services after high school?

There is NO obligation of any kind to join any branch of military service; in fact, most cadets do not go into the military. But for those who are interested in pursuing a career in the military, Army JROTC is a real benefit.

Who are the instructors?

What does the program cost?

There is no cost to enter the program. The course materials, uniforms, supplies, and equipment is issued to the cadets free of charge by the U.S. Army. There are some things that JROTC as a class might have to pay for, such as a field trip, issued equipment that is lost or damaged, or special equipment for a competition team.

Are both girls and boys enrolled?

Yes. All leadership positions are available to both males and females equally.

What are some of the benefits of taking the program?

Aside from being a credit in high school, there are several other benefits that can be attained from joining the program. First, for people that enlist in the military after taking JROTC for at least three years, the military will take them up two pay grades and ranks. Second, many colleges’ give advance standing and credit for completion of the JROTC program if the person enroll in college ROTC. Third, the JROTC instructors have been very successful in helping high school students, who are interested, obtain ROTC scholarships and service academy appointments. Scholarships obtained from the ROTC program can be up to $60,000.

Do I wear a uniform?

Yes. After earning a uniform in the first year, cadets are required to wear the Army JROTC uniform once a month during their class on uniform day. Usually at Buchanan County JROTC, uniform days are on Wednesdays/Thursdays, but there are exceptions. The uniform is provided by the military, and is custom-fitted to each cadet. The uniform consists of a pair of trousers, shoes, black socks, shirt, black belt, and buckle. Cadets earn their rank and awards to put on their uniforms. It is considered an honor to wear the uniform and cadets wear it with pride.

There is a separate category of student (PARTICIPATING STUDENT) that is not required to wear the uniform, but may choose to transition to Cadet Status at any time after their first semester

Yes, although not to the extreme. There are, however, regulations about the personal appearance of cadets, wearing of the uniform, and even how to address the other military personnel and cadets. For example, on uniform day, males must have their hair not exceed past the ears lengthwise, and female cadets must have their hair off the collar.

Can I still do other activities, outside JROTC?

Certainly, JROTC students are involved in everything from varsity sports to band, chorus, student government, and other clubs. You can spend as much or as little time as you want to with JROTC. The program offers several additional teams (Rifle team, Drill team, Exhibition team, and Color Guard) that cadets may join in additional to the normal JROTC class activities. The program also offers field trips, summer camps, and other group-sponsored activities. These offers are not mandatory for cadets to participate in; in fact JROTC encourages students to participate in other activities. However, the military ball/change of command ceremony event is a mandatory event for all cadets to participate in.

What kind of recognition can I get by participating in the program?

There are a large number of awards which cadets can earn for participation and achievement in the program. Some are given by the unit, but others can be awarded by local military organizations such as the Veterans of Foreign Affairs, Military Order of Purple Heart, and the Daughters of the American Revolution. These are just a few of the organizations that give awards. All awards have certain criteria, but are open to all who meets those standards. Involvement, good leadership traits, and being an active participant of the program are the main requirements.


What about the leadership training?

In JROTC, being a leader means first being a follower. The curriculum teaches all aspects of being a good follower and being a good leader. The program encourages practical application in other school activities as well as in JROTC.

How can I enroll in the program?

If you want to be in the program it is as simple as signing the course sheet for that program. Any person can start JROTC any grade in high school, it is not required that you enroll in ninth grade.

Sorry, but there was nothing found. Please try different filters.